Sometimes I feel like a bowling pin. Life is the big, scary, heavy bowling ball that comes hurling at me and knocks me down. Then something comes along and sets me upright again, and I just have to brave things out.

What a week I have had, let me tell you. In a nutshell, I had an awesome literature class, I had a pain attack in my elbow, my mom was in a car accident, I had a family adventure, I lost all hope I had of having a good year and I had the most awesome backgammon experience ever. I’m much too tired to tell you about everything, but I will write about some.

I was sitting in math class on Monday, and suddenly my elbow started to hurt. Damn Fibromyalgia. Very quickly I couldn’t move my arm at all, and I left the classroom to try and find ice somewhere. The teachers’ lounge didn’t have any, and I was in insane pain. A little while later my friend came over, and I guess my face was one of major suffering, because her facial expression changed immediately and she asked me what was wrong. It was her face that made me cry; until then I had been trying to be strong and keep it together, but when I saw her I just started sobbing. Then, amazingly, she reached into her bag, into her lunchbox, and pulled out an ice pack! I might have cried harder, but it was what saved me.

I was trying to walk to my next class (English), but when my English teacher saw me she quickly dropped her bag and put her hands on my shoulders to comfort me/ stop my shaking shoulders (sobs) that were worsening my pain. She brought me to the teachers’ lounge and made sure there was someone who could sit with me until I calmed down. So I ended up talking to a very sweet teacher who taught me two years ago, while putting the ice directly on my elbow and crying. I don’t think I stopped crying the entire 40 minutes we were there, but at least we had a nice conversation. I managed to make it to art that day, and just drew while an ice pack numbed my elbow (tied it with a bandana- nifty trick).

On Tuesday, I called my mom in the afternoon to ask her something, and knew instantly when I heard her that something was really wrong, even though she said she would be home in a few minutes. My first thought was that she had gotten really sick, that she had been in hospital all day and her cousin was driving her home. Next, I thought that she had a huge foam brace around her neck and was permanently disabled. Then I just imagined blood. She indeed made it home a few minutes later, she was on her own, and looked intact. The car didn’t though.

She had been stopped at a red light, when this car slammed into her from behind and her head flew forward. Do you know what happened next? She got out of the car, went to the man who had slammed into her, and shouted “Who do you think you are?!?! My kids need me!!!”  The man later told her his “foot slipped”. Thankfully, she’s absolutely fine, and the car is not important. The man filed his insurance report a little while after my mom, so we can get the car fixed and don’t have to worry about that. The main thing is: my mom is okay.

It was so scary. I don’t want to talk about it anymore. What’s next?

Backgammon. So one important thing for you to know is that the separation between teachers and students at my school is not very drastic (which is obvious if you actually follow my posts and read what I write)- they are our teachers, there’s that divide, but there’s mutual respect and we’re treated as almost equals. The teachers have the final say, but we actually have one.

Basically, the game was between this kid named Benson (fake names) who was playing against my friend, Maya (we keep a backgammon set in our school lobby. There used to be a Ping-Pong table, but it broke. We replaced it with backgammon.) I was helping my friend, and so was my former math teacher (not my current one), who we’ll call… Ran? If I’m to make an awkward abbreviation of his name. Ran and I were helping Maya, and the game was starting to get intense. For those of you who know the rules, every single situation that can arise in a game, did. Benson was winning, then Maya, then Benson…. Ran and I were moving Maya’s pieces when she took too long, Benson was getting vocal, and slowly a crowd started gathering. Seriously. We had an audience, watching this backgammon game. It was so awesome.

Anyway, the game got to the point where both Maya and Benson could start removing pieces from the board, and it’s all just up to luck, of who will get there first. Everyone in the audience was drumming their hands against anything available, chanting, and there was all this adrenaline in the air. Beson had five pieces in, Maya had four. Maya rolled the dice, removed two pieces. Benson rolled doubles, removed four. The crowd was going wild. Ran and I were giving each other these looks, Maya and Benson were having some weird staring contest, emotions were running high. Maya rolled, the right numbers showed up, her two pieces were out and we won!!!! Benson (jokingly) dramatically slammed his hand against the table and stalked off, while Ran and I clapped madly, the audience started to scatter and chatter excitedly, and I raised Maya’s hand in victory! Everyone was shouting, it was crazy.

I love that my school can get so into things, and we just had such a great time. Remind me some time to tell you how my friend and I caught a robber, and the entire school watched the police show up from the lobby’s window. T’was eventful. People are still talking about it. Not really, but it was cool.

Wow, I have written way too much. That’s okay though. There’s been a lot going on. So as you can see, it’s been a long and interesting week. Now, I really have to go do my insane amounts of homework. But do you see what I mean, about the bowling pin? I didn’t go into everything here, but I’m just being knocked around all the time, while still trying to have a good time in life. I really just need to sigh right now, so I will. At least I have a fun soundtrack to my life. Every now and then I put together a playlist and it ends up defining the different eras in my life. The current one is called, “I’m going, I’m going.” I love it! Birdy’s new album, Fire Within, came out this week and it is amazing, so I’m also enjoying that, especially No Angel, All About You, Light Me Up and Maybe. In case it interests you :) Maybe is on the right, if you’d like to hear it.

P.s. I know my posts lately have been kind of random and I ramble a lot. This is my official apology. I’ve had so much going on, I just don’t have time to come up with some really original, inspiring material. Honestly, when I sit down to write I just need to get all of this stuff out. The first draft of this was actually 1700 words, and I cut a bunch out. It’s probably boring for anyone who isn’t me. But, my point is, I’ll still keep working, and hopefully my stuff be back up to par soon.

People like us we’ve got to stick together, keep your head up, nothing lasts forever, here’s to the damned, to the last and forgotten. It’s hard to get high when you’re living on the bottom. -People Like Us, Kelly Clarkson 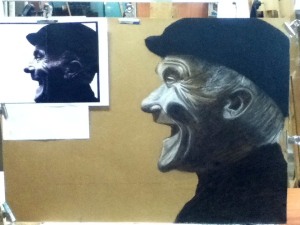 Almost done!!!
Previous photos of the picture’s progress are shown in:
To Create and It’s Called Perseverance